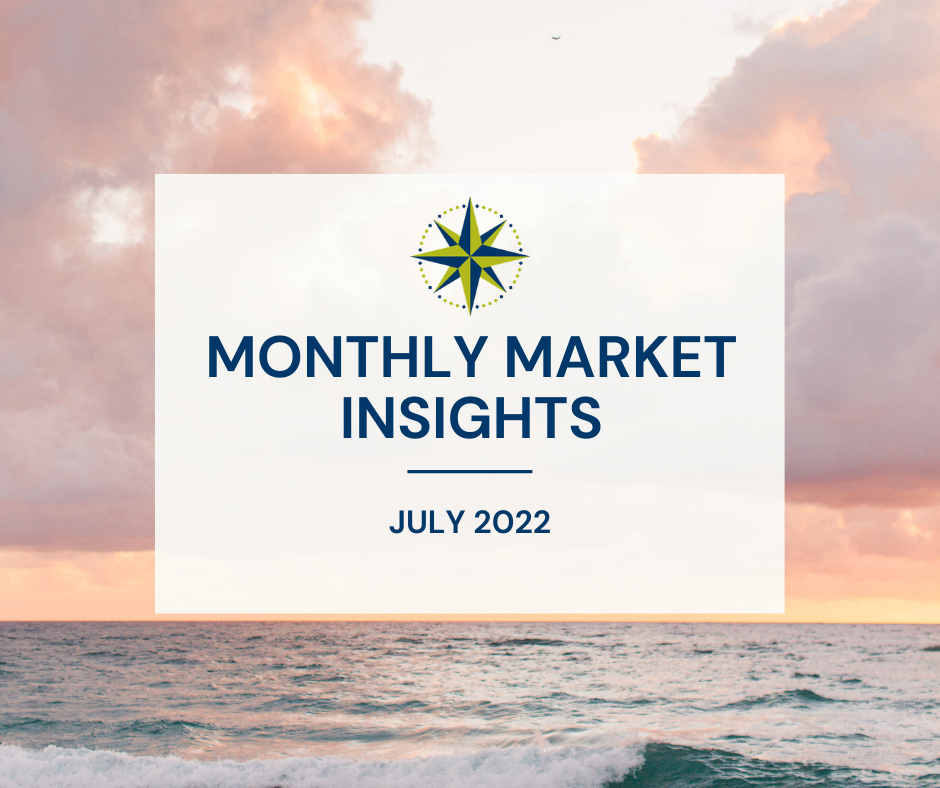 June was a tough month for the markets as recession talk prompted investors to recalculate risk in their portfolios.

The Dow Jones Composite Average led the indices to lose only 6.84% while the Standard & Poor’s 500 Index fell 8.39%. The tech-heavy Nasdaq Composite dropped the most losing 8.71% in the month of June. 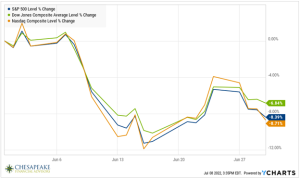 Markets grappled this month with an uncertain economic outlook. After a descent in the first half of June, markets were further rattled by the May inflation report (Consumer Price Index), which showed a year-over-year increase of 8.6% and that inflation was not slowing down any time soon. This was mostly led by 34.6% increases in energy prices and a 10.1% rise in food prices, making this the highest rate of increase we have seen since December 1981.

With this increase in Consumer Price Index, it led to concerns that the Fed would need to become more aggressive with its rate hikes, making the prospect of a recession more likely.

Stocks briefly rallied after the Fed announced a hike in the federal-funds rate of 75 basis points. All Fed members said they expected rates to rise to at least 3% by year-end, with half anticipating that rates may rise even higher[1].

On June 22, Fed Chair Jerome Powell told Congress that the Fed was committed to combating inflation. Stocks surged in the third week of the month on the promise that an economic slowdown may allow the Fed to be less aggressive with future rate hikes. But the enthusiasm faded in the final days of trading as choppy price action led to declines to close out the month.

All industry sectors were lower in June with the Energy sector leading the way down 17.99% due to speculation of demand with recession fears swirling. 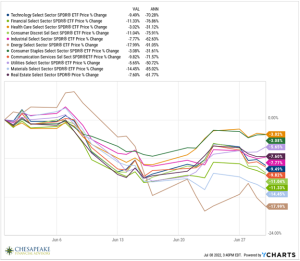 What is everyone talking about in July?

Earnings season begins this week, with major financial institutions announcing later in the week. This will provide investors with key insights into the health of American consumers. Companies will also communicate how they are navigating an increasingly challenging economic landscape.

Each quarter, the degree to which the stock market responds to corporate earnings varies. But as investors grapple with a cloudy outlook, company reports over the next four to six weeks may serve as an important barometer for measuring the nation’s economic health and evaluating stock prices. 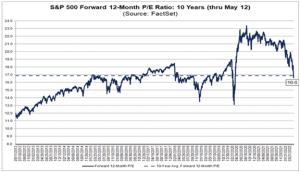 Major European markets were under pressure this month, as they faced increasing economic and geopolitical headwinds. While major Asian markets were lower with the exception of Hong Kong, which rose 2.08% as China emerged from its COVID lockdown.

As you can see, in the chart below, many markets worldwide have been feeling the same pain and uncertainty as the US. 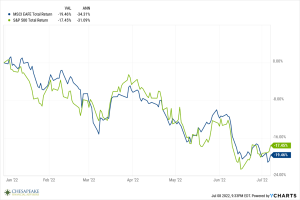 The economy shrank at an annualized rate of 1.4 percent in the first quarter. The decline in GDP growth was largely attributable to a widening trade deficit and a slowing rate of inventory build-up by businesses. On July 28th second-quarter GDP will be announced and will be a key indicator of whether we are closer to a recession or not.

Employers added 372,000 new jobs in June, which beat the 250,000 estimate for the month. Education and health services led job creation this month while the May jobs report was led by leisure and hospitality. The unemployment rate remained unchanged at 3.6%, while wage growth increased 5.1% year-over-year in June, which means we are still seeing inflation outpacing wage growth.

Housing starts fell to their lowest level in over a year, declining 14.4% in May. Single-family homes dropped 9.2%, while multiple-family housing drastically fell 26.8%.

Sales of existing homes fell 3.4% in comparison to April and were 8.6% lower than a year ago. It was the weakest reading since June 2020.

New home sales posted their first gain this year, rising 10.7% in May.

Seeing a slow down in housing starts and sales of existing homes with an increase of new homes for sale should bring down the price of these homes for sale. The market will become saturated with new homes for sale and limit buyers given the steep interest rate increases on mortgage loans this year.

This allowed the Fed to charge full steam ahead to continue to raise interest rates as their main objective is to combat inflation.

New orders for long-lasting goods rose 0.7% in May, making it the seventh out of the last eight months that orders have increased.

The Federal Reserve announced a 0.75% hike in the federal funds rate. It was the biggest rate increase since 1994. The announcement was made following the June 14–15 meeting of the Federal Open Market Committee (FOMC). The 75-basis-point rate increase was higher than the earlier Fed guidance of a 50-basis-point increase and a response to recent inflation data and rising inflationary expectations.

We are very interested to see what the Federal Reserve will do following the July 26-27th meeting. The June inflation report will be announced later this week on July 13th. Will a decrease in CPI be enough to slow down the Fed’s rate hikes? Are the latest jobs report enough for the Fed to believe the economy is still strong? July is going to be a telling month that will shape the outlook for the remainder of 2022.

Have concerns about whether your assets are properly set up for retirement? Let’s talk – (410) 823-5442 or invest@peakeadvisors.com.