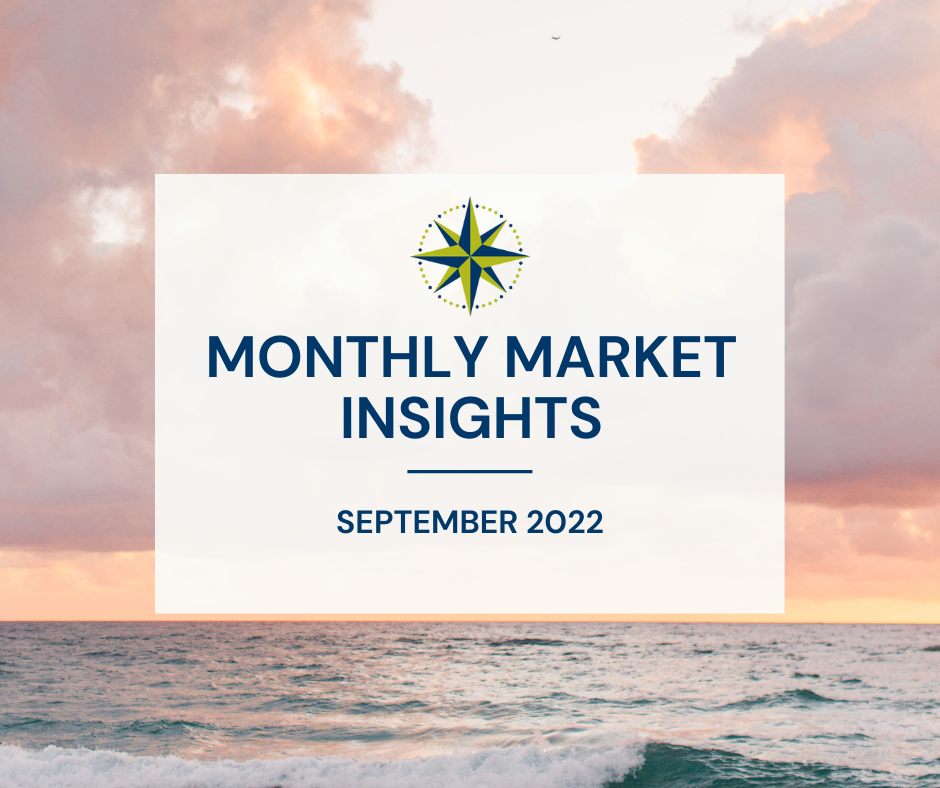 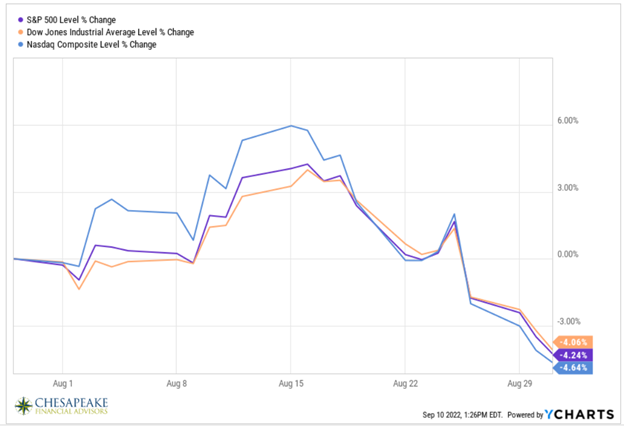 August started off well enough, building on the summer rally over the course of the month’s first two weeks. Investor sentiment was lifted by a surprisingly strong employment report that saw the economy add 528,000 jobs in July and later by a better-than-expected Consumer Price Index (CPI) report that saw inflation decelerate slightly.

A fresh batch of positive earnings surprises provided an additional boost for stocks. Overall, the earnings season turned out to be better than what many investors had expected. With 97% of the companies comprising the S&P 500 reporting, 78% reported earnings that exceeded Wall Street analysts’ estimates.

The fuel for the stock market’s rebound since the mid-June low was, in part, the belief that the Fed may ease up on the pace and magnitude of interest rate hikes owing to early signs that inflation may be cooling.

But Fed Chair Powell’s much-anticipated speech at the Jackson Hole Economic Symposium rattled investors. By the time Powell finished his speech on the morning of August 26th, the market was in full-on retreat. Powell’s comments did not include anything investors hadn’t already heard, but the forcefulness with which he communicated the Fed’s commitment to lowering inflation struck many investors as especially hawkish.

The market’s month-to-date gains disappeared following the speech as Powell appeared to end any investor hope of a pivot by the Fed. Stocks added to their losses in the month’s final days as investors confronted a monetary policy landscape that potentially offered little relief from further Fed interest rate hikes.

Most industry sectors ended lower for the month, including Tech -6.21% and Healthcare -5.77%, while Energy +2.65% and Utilities +0.53% sectors registered a monthly gain. As seen in the below chart, the inverse relationship between Energy and the overall market. 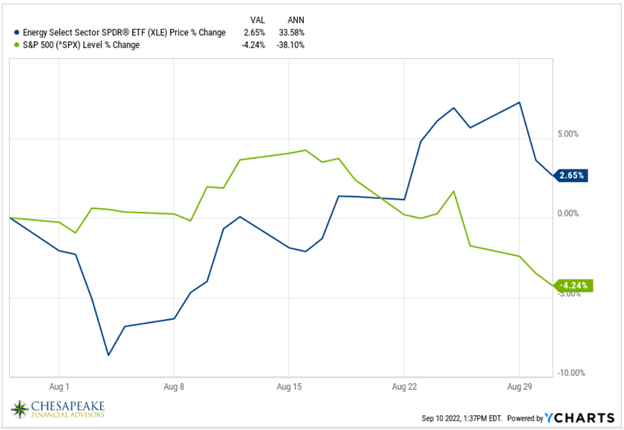 What Investors May Be Talking About in September:

In the month ahead, all eyes will be on the Fed again when it meets in late September. After two consecutive 0.75% rate hike in June and July., the Federal Open Market Committee (FOMC) will once again be meeting to consider what’s next for short-term rates.

The outcome of this meeting, scheduled for September 20-21st, appears more certain following Jerome Powell’s Jackson Hole speech. But the Fed has indicated that any potential rate hike will depend upon the economic data leading up to the meeting.

Some see the second consecutive quarter of GDP contraction and declining energy, metals, and food input costs influencing the Fed’s decision. Others believe that comments in August by Powell and other Fed officials that the inflation fight is not over may have thrown cold water on that hope. 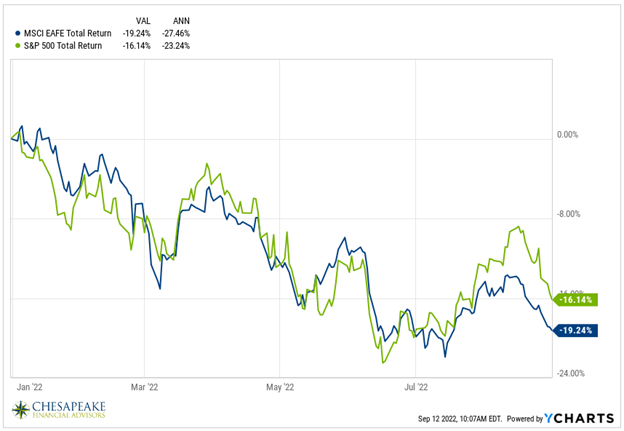 The economy shrank at an annualized rate of -0.6% in the second quarter, an improvement from the initial estimate of a -0.9% contraction. Please refer to our Recession webinar from last month to learn more about key items to think about during a Recession.

Nonfarm payrolls increased by 528,000 in July, which was double the consensus estimate. The unemployment rate dipped to 3.5%, while average worker wages increased 5.2% from a year ago.

Existing home sales fell -5.9% from the sales in June, as higher interest rates weighed on buyer affordability. It was the sixth consecutive month that existing home sales have declined. Despite the softness, the median sales price rose 10.8% from a year ago. 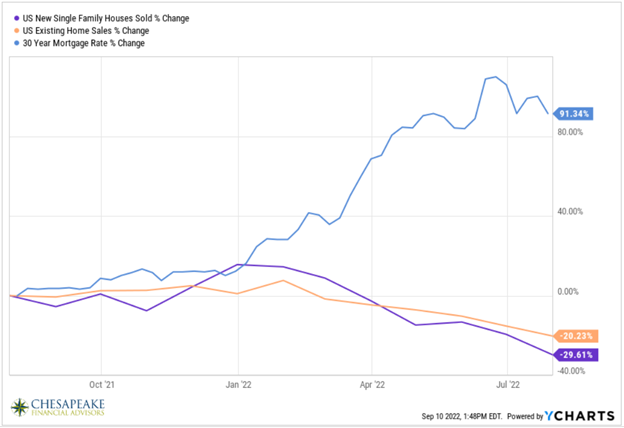 Consumer prices eased in July but remained near record highs as the CPI rose 8.5% year-over-year.

Durable goods were unchanged from the previous month, though were higher by 1.2% when excluding defense orders.

With indicators moving in different directions, investors continue to grapple on where they believe the economy is heading. Are we in a Recession? Well, it is tough to say we are truly in a recession with unemployment and jobs reports where they are today, but with two consecutive quarters of negative GDP and inflation at 8.5%, we understand the recession argument. We continue to monitor inflation and analyze the GDP revisions each month to gain a grasp on what is really happening in the economy. Now, we believe that as inflation continues to come down and the consumer is still strong, we see ourselves coming out of these uncertain times with increases in the strong companies we hold. This could change if we see stagnant inflation even with these historical rate hikes.

Minutes from the July’s Federal Open Market Committee (FOMC) meeting reflected a broad consensus among Fed officials that additional rate hikes were still required to combat elevated inflation, though acknowledging economic weakness may temper the size and pacing of such hikes. Jerome Powell warned that he expects raising interest rates will cause “some pain” to the US economy.

We are seeing rate hikes across the world as well as many central banks try to combat inflation. “Regarding developments abroad, central banks in advanced foreign economies had quickened the pace of policy tightening in order to address above-target inflation,” according to the July meeting minutes. “Eight advanced-economy central banks raised their policy rates over the period.” 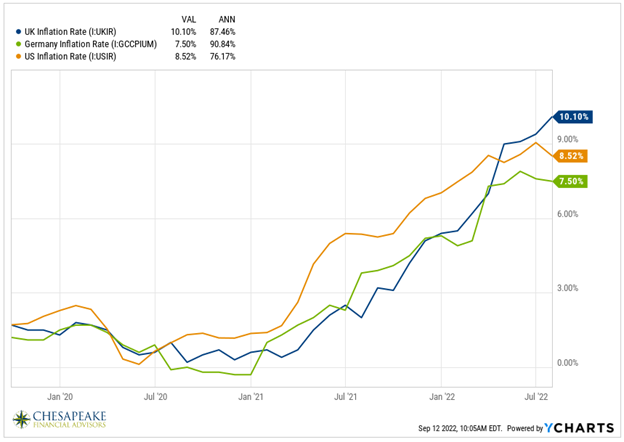