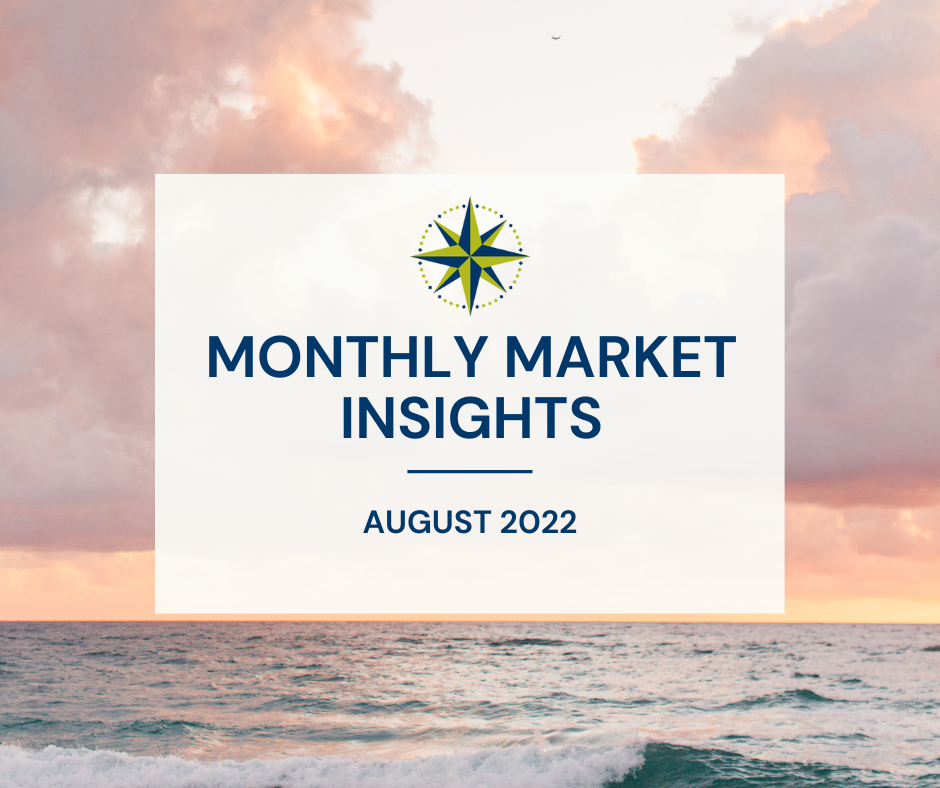 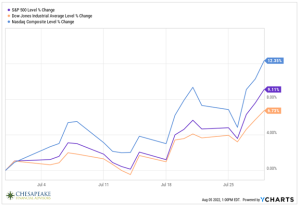 Stocks have been under pressure all year due to rising inflation and slowing economic growth. There were not many signs in July that suggested inflation would begin to decrease or that the economy was set for a rebound. Nevertheless, investors saw falling energy prices and persistent strength in the labor market as hopeful signs that an economic downturn may not be as severe as some expect.

Investor sentiment improved further as earnings season got underway in the back half of the month. This increased optimism was not a result of exceptional earnings results but rather more attributable to the fact that earnings were not nearly as weak as many had feared. Companies painted a picture of a reasonably healthy consumer and businesses continue to effectively navigate inflation and supply chain challenges.

The month of July brought us perhaps the most critical week of the summer for the market, with investors awaiting information on corporate earnings, a Fed meeting decision on interest rates and the release of an initial estimate of the second quarter GDP.

Earnings came out of the gate a bit shaky as a big box retailer missed earnings and guided future earnings estimates lower. However, subsequent earnings reports from big tech companies impressed investors. Markets were further relieved by the Fed’s decision to hike rates by 0.75% and Fed Chair Jerome Powell’s comment that the pace of future rate hikes may slow.

All industry sectors posted gains in July with the Consumer Discretionary sector leading the way up 18.4% thanks in part to short covering mainly in the auto industry. 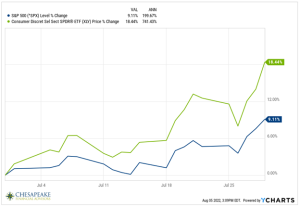 What is Everyone Talking About in August

Historically, August has been a positive month for stocks, with an average return of 0.7% for the month.

During the month, the government will release a string of economic reports to give the Fed fresh insight into the economy for its late September meeting. After, September, the Fed only has two scheduled meetings for the rest of 2022, one in early November and one in mid-December.

World Markets rallied following the lead of the US markets. The MSCI-EAFE Index gained 3.74% in July.

As you can see in the below chart, developed markets across the world continue to lag behind the US market. 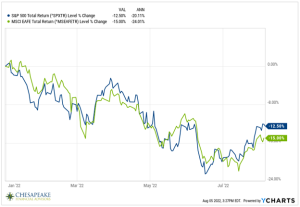 The economy shrank at an annualized rate of 0.9% in the second quarter as consumer spending slowed and businesses reduced inventories. GDP posted its second straight quarter of negative growth, meeting the technical definition of a recession. Unlike most recessions though, the past two quarters have been marked by strong employer hiring.

Employers added 528,000 new jobs in July, which beat the 258,000 estimates for the month. Leisure and hospitality led job creation this month while June jobs report was led by Education and health services.  The unemployment rate decreased to 3.5%, while wage growth increased 5.2% year-over-year in July as we continue to see inflation out pacing wage growth.

Retail sales increased 1.0% in June, beating consensus estimates. Gasoline stations, online sales and bars and restaurants were some of the biggest contributors.

Housing starts slipped 2.0% as rising prices and increased mortgage rates weighed on buyer demand. It was the second consecutive month of declines.

In the chart below, you can see the abnormal sharp spike in 30-year mortgage rates over the past year while home prices have risen. This is putting a great deal of stress on the market and pricing out buyers. 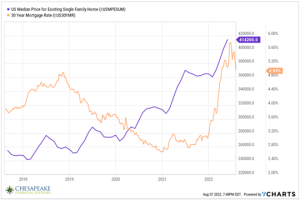 Orders for products designed to last three years or more rose 1.9%. When excluding defense spending, durable goods orders were only up 0.4%.

The Fed officials agreed to a 0.75% rate hike in the federal funds rate, acknowledging that the economy has slowed since the last meeting in June.

In a post-meeting press conference Fed Chair Jerome Powell said that future rate hikes would be made on a meeting-by-meeting basis and that it may become appropriate to slow the pace of future interest rate hikes.

This statement was very important to how the markets reacted following the press conference on July 27th. With the potential for slower rate hikes, the market has increased 3.1%. But, following the latest jobs report, this could be exactly what the Fed officials needed to confirm that the economy is able to with stand faster rate hikes to combat inflation at 40+ year highs. Could we see a mid-meeting rate increase? Or will the Fed committee wait until their next meeting in September? Time will tell, as investors try to figure out the markets next move in the month ahead.